“Calle Real is, hands down, the most explosive salsa/timba band to ever come out of Europe. They take command as the leaders of the globalization of salsa/timba music, and their vision for their music has revolutionized the genre itself.”
DJ Melao (Miami), one of the world’s most successful salsa/timba DJs

Calle Real, a Swedish Timba band, was formed in 1999 by Patricio Sobrado. The band’s 12 members play a modern, tightly arranged style of Cuban music that swings with a totally unique sound. 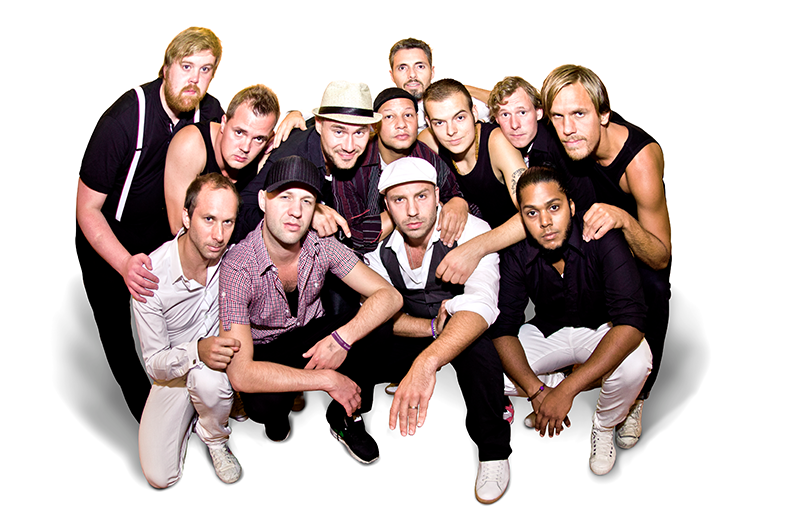 Rickard Valdés, son of the legendary pianist, Bebo Valdes, has toured with his father’s band, Bebo Valdes & Cigalla. While Rickard is the only member of the band with Cuban roots, other members of the band have studied and played Cuban music while living in Cuba. That all the band members grew up in Sweden contributes to the unique sound of Calle Real.

The band’s international debut was in 2003, when they were invited to play at the Benny Moré festival in Cuba; a focal moment for the very best of Cuban Salsa and Timba. The event was captured in a documentary that was featured at the 2004 Gothenburg Film Festival and has played on Swedish television.

Timba is an Afro-Cuban music style that evolved out of Salsa. In the beginning of the 1990’s leading Cuban bands launched this new style, most prominently, NG LA Banda, but with major contributions from Charanga Habanera, Isaac Delgado, Paulito FG and Los Van Van.

Calle Real’s members compose most of the music they perform. While influenced by, and in dialog with the musical innovation of other musicians, Calle Real’s sound is identifiably unique.

Calle Real’s first album, Con Fuerza (2006), was nominated in 2006 by the Latin Grammy Awards for “Best Salsa Album of the Year.” The album was also awarded “Best Album” and “Best New Artist” in 2006 by the French FiestaCubana.net.

In the Spring of 2007, Calle Real was the house band on the popular Swedish talk show Stina!, hosted by Stina Lundberg Dabrowski, and frequently performed with famous Swedish artists.

Calle Real first gained international attention with their debut album and have earned fans in Europe, the U.S., South America, the Caribbean, and Australia. Musicians in those countries now even cover Calle Real songs. But it may be the French who most appreciate the band’s sound. In 2007 the band was nominated for best new artist and best Salsa album, with Thomas Eby nominated for best salsa vocalist.

In 2009 Calle Real released its highly anticipated second album, Me lo Gané. It was composed, recorded and produced in Stockholm, Sweden by the band.

Since 2003, Calle Real has been selling out concerts in Europe and across a globetrotting tour that included Ethiopia, Mali, Venezuela, Russia, Israel, Cuba, and Japan. The band’s music was even featured in the critically acclaimed HBO series, Dexter.

“Of the most exciting developments within Swedish music today…Stockholm-based Calle Real… belongs among the most brilliant with the tight, devastating swing of its timba-music – a spicy hot modern form of Salsa to which it’s impossible not to scream “Esperanza!”…